PR – How was this year’s Red Wednesday? 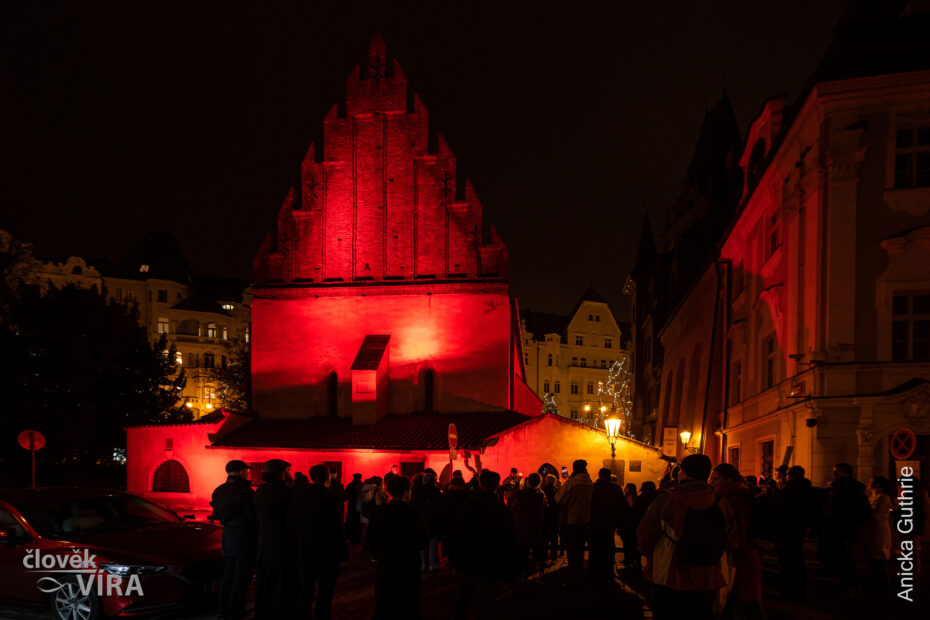 RedWednesday was observed in the Czech Republic on 23rd November. The Czech Republic took part in this international initiative, started in Great Britain in 2016, for the fifth time. Buildings all over the country were illuminating in red to commemorate those who have been persecuted for their faith. More than 130 buildings were lit up this way, not only cathedrals, churches, meeting houses and synagogues but also public institutions such as theatres, concert halls and schools.

In Prague, the Chamber of Parliaments and the Lookout Tower on Petřín Hill were lit up in red, the colour of martyrs. As part of RedWednesday an international conference also took place, and included representatives of the pontifical charity Aid to the Church in Need (ACN) and the Christian Solidarity International (CSI) organisation.

The conference, subtitled Prosecuted for Faith…How can I help?, was open to the public and held in the Brožík Room of the Old Town Hall. Representatives of the institutions organizing the event, Father Stanislav Přibyl from the Czech Bishops’ Conference (CBC), Petr Jan Vinš from the Ecumenical Council of Churches in the Czech Republic (ERC) and Michael Pelíšek from the Federation of Jewish Communities in the Czech Republic, had the opening words. Participants were welcomed by Robert Řehák, special representative for the Holocaust, interreligious dialogue and freedom of religion from the Ministry of Foreign Affairs.

The audience listened to nine contributions in two blocs: „Do we speak enough about freedom of religion?“ and „How to realistically support freedom of religion in a global world?“. Some speakers, such as Caroline Cox, British Baron and member of the House of Lords, and the Irish political activist and entrepreneur Declan J. Ganley, while other foreign guests came to talk in person.  These included John Eibner, the Director of Christian Solidarity International (CSI), who spoke together with CSI Project Manager Franco Majok about their work in freeing and repatriating enslaved Christians in Sudan. Then there was an online presentation by the Sudanese Mariam Ibrahim Ishag religious freedom activist, sentenced to death in her country for marrying a Christian. Thanks to international pressure she was released. Zbyněk Tarant from University of West Bohemia (ZČU) in Plzeň, who follows anti-Semitic attacks on the Czech Internet, spoke on the topic of persecution of Jews.

As in previous years, Marcela Szymanski from the Aid to the Church in Need organisation, took part in the conference. She has a direct role in the Religious Freedom in the World monitoring report, which the CAN publishes biannually. She highlighted in particular the rapidly worsening situation of Christians in Nigeria, who are being purposefully physically and economically liquidated by Islamic groups. The final speech was given by former European Representative Pavel Svoboda, from the Institute for Christian-Democratic Policy which initiated the observance of RedWednesday in the Czech Republic.

The conference was followed by an interfaith prayer for all those persecuted for their faith, jointly led in the Great Hall of the Carolinum by Prague Archbishop Jan Graubner, Superintendent of the Evangelical Methodist Church Ivana Procházková and Rabbi David Maxa for the Federation of Jewish Communities. People then set out from the Carolinum with illuminated candles for a procession around the centre of Prague. They made symbolic stops and prayed briefly at the Old-New Synagogue, the St. Giles Roman Catholic Church and the Bethlehem Chapel, connected with the activities of Master Jan Hus. There a final benefit concert was held, featuring organ music composed by J. S. Bach, interwoven with reflections by Albert Schweitzer, organs by Jaroslav Tůma and recited by Rudolf Kvíz. The event was broadcast live on TV Noe, with the proceeds from the concert going to freeing Christian slaves in Sudan.

The date of the next Red Wednesday is 29th November 2023